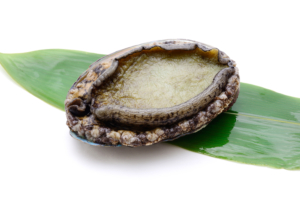 Iwate prefecture faces the Pacific Ocean and the region is known for their variety of delicious seafood, mineral rich seaweed, and plentiful shellfish. This part of the ocean is a fertile fishing ground due to the warm ocean current, “Kuro-Shio”, meeting the cold ocean current, “Oya-Shio”. This creates a favourable environment for plankton growth due to the nutrients brought by both currents, and attracts abundant marine life to the area. 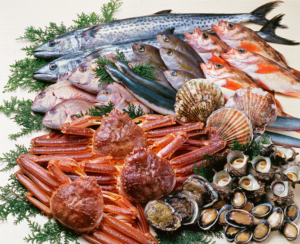 Its irregular and jagged coastline that was formed by partially submerged river valleys is locally known as the “Sanriku coast”. This unique feature brings mineral rich water to the ocean and creates a perfect habitat for Iwate’s Ezo-abalones. 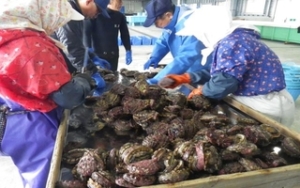 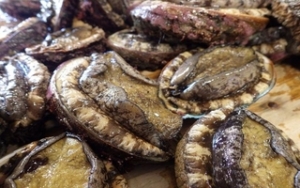 Ezo abalone is a type of black abalone that lives in cold water. Their habitat is in the northern part of Japan and when mature, they are approximately 10 centimetres long.   They tend to be smaller than black abalones found along the California coast.  Due to the cold climate in Iwate, Ezo-abalones generally take seven to eight years to mature in wild, and are harvested around November and December.

Iwate is also known for farm raised abalones.  In addition to harvesting wild abalone, farming  abalone allows them to be available year-round at a stable price. Iwate provides the largest quantity of abalone in Japan. 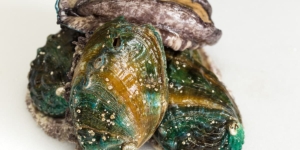 This regional delicacy has a wonderful texture and sweet flavor, and is traditionally enjoyed in a dish called “Ichigo-ni いちご煮“ , where the abalone and sea urchins are cooked in a simple clear broth to bring out the ocean flavor.  Abalone is also eaten as sashimi or grilled. 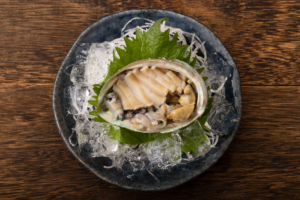